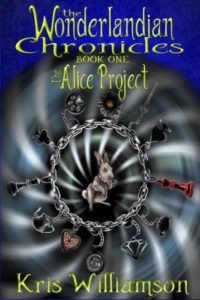 The Wonderlandian Chronicles Book One:
The Alice Project
by Kris Williamson

Young and brilliant, Allie Mayweather had an offputting way of making up stories to make her life seem more exciting and to hide her true feelings. Raised by her mother and grandmother, she never knew her father, but her family was well provided for by her mother’s friend, the wealthy and mysterious Mr. Tessla. After her mother dies of cancer when Allie is only eight, Mr. Tessla fulfills a promise by taking care of Allie for the rest of her life. At eighteen, she even goes to work at Mr. Tessla’s company where she befriends some of the other odd characters he’s managed to employ, while gaining the ire of all her other coworkers. The only flaw in her life with Mr. Tessla is his young wife, Prima Pendrake, who is beautiful but cold, cruel, and cunning. Still, Allie has a pretty good life by the time she turns twenty-one. She has an odd, yet charming roommate, a small group of strange but supportive friends, a man who treats her like the father she never knew, and a job that provided all she needed, despite not getting on well with most of her coworkers. And then, a week after her birthday, it’s all torn apart as everything changes in an instant. It is only then that she realizes the entire world as she knew it was a lie… a lie that everyone close to her was involved in. Once given all the facts, Allie must decide if she is willing to put her faith in those who deceived her for her entire life and join them on a race to save a world she didn’t even know existed, or let them all go and continue on alone in a world that never quite fit her. 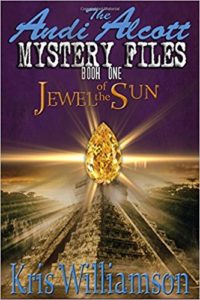 The Andi Alcott Mystery Files:
Jewel of the Sun (Volume 1)
by Kris Williamson

Andi Alcott is a self-made success by the age of 28. Between owning a bar and running her own private investigation business, she manages to keep busy… which is really all she wants out of life. She is especially excited to take on a new case as a distraction from the upcoming five year anniversary of her brother’s death; she becomes even more thrilled when it seems her new case points to an old foe, an international thief known only as Jax. Issuing a challenge to her ex-childhood sweetheart, Detective Dante Ruiz of the Sheridan County Police Department, the race is on to see who can catch Jax first. But when Andi finally comes face to face with the elusive criminal, she learns that not everyone nor everything is as it seems. Add in a museum robbery with a strange and unbelievable motive that includes murder, and Andi’s desire to keep busy begins to make her unravel. At the heart of her problems is a missing gem known as The Jewel of the Sun, which comes with a strange and deadly legend. Can she, Dante, and Jax figure out who stole the Jewel of the Sun before anyone is killed? Find out in this first adventure in the Andi Alcott Mystery Files series! 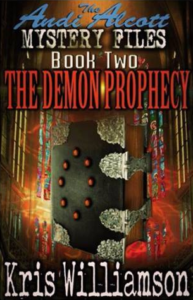 Two years after the museum case that shook Private Detective Andi Alcott’s sense of reality, she is tense and frustrated her life. Money problems are at the top of her list of concerns, as usual… but now there is so much more weighing her down. Since saving her life in that museum basement, things are more awkward than ever between Andi and her ex-childhood sweetheart, SCPD Detective Dante Ruiz. On top of her tumultuous friendships and financial woes, Andi feels that her life has fallen dreary
and stagnant. But just as she closes her last open case and decides to try and take a cheap vacation, two new cases fall into her lap. One involves a local teen who has gone missing, her client being the boy’s distraught father. Unable to bring herself to turn away someone in need, she agrees instantly to help find the teen. The other is brought to her by none other than OOA thief Jax, who is back in town on a new case of his own. At first she resists getting involved, certain that his brand of work wasn’t anything she wanted to be a part of… but after meeting with Dusty, a mutual friend and local crime lord, Andi finds herself drawn not only into Jax’s occult case, but also Dante’s SCPD case involving the murder of a well-known but low level criminal.

Meanwhile, Jax’s newest case had brought him around the world, searching holy buildings for secret doors that were hidden centuries ago by the very first members of the Occult Observation Alliance (OOA)… doors that he must now destroy in order to stop a global, and possibly universal, catastrophe. At first he is thrilled when the end of his search brings him back to Sheridan County, and he hopes to prod Andi’s curiosity until she agrees to spend time with him helping on the case. But as more things go wrong and he receives more information about what’s behind those doors, Jax begins to doubt his place within the OOA and in Andi’s life, especially when his case crosses directly into Detective Dante’s path.
For Dante’s part, his life had spiraled downhill since the museum case. His unhappiness with his marriage has dissolved into a drinking problem that worries his partner Drew, his wife Charlotte, and his best friend Andi. When he begins experiencing black outs, he worries that he’s completely lost control… until the source of those black outs is linked to a case Andi just so happens to be working on. This leads Dante to realize that Jax, the criminal he hated most, was back in town. Little would he know that he, Jax, and Andi would all need to rely on each other in order to save their lives and the world.

Full of mystery, adventure, drama, and excitement, The Demon Prophesies drags our favorite characters to hell and back… and not everyone comes out unscathed. 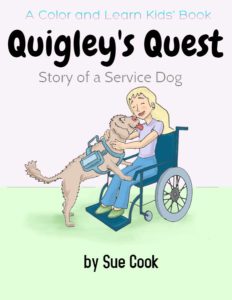 Check out the newest from Notebook Publishing! “Quigley’s Quest” by Sue Cook is a children’s book about a puppy training to be a service dog. And it’s double the fun by serving as a coloring and activity book as well!