Butch Patrick aka Eddie Munster from “The Munsters.” on Deadersons! 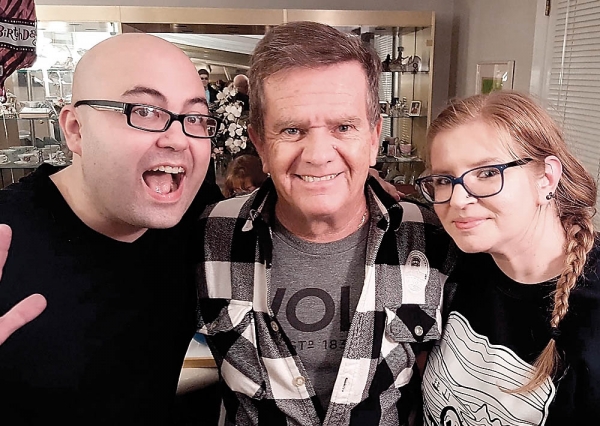 Butch Patrick, center, who played Eddie Munster in the 1960s sitcom “The Munsters,” poses for a photo with “The Deadersons” producers Wyatt Elliott, left, and Kris Williamson after filming the December episode of the online series.

Everything continues to be undead and well in the city of “Bloody Hills,” the setting of the locally produced YouTube sitcom “The Deadersons.”

The online show, which first aired about a year ago, explores a city of zombies that tries to associate with a neighboring city of the living after the apocalypse. The series is inspired by the 1960s television series “The Munsters” and “The Addams Family.”

Now in its second season, the Rockford-based series takes on themes from current culture — only with a bit of undead flavor, according to co-producer Kris Williamson.

The November episode was about a local election for mayor, which coincided with the presidential election.

“We touch on social issues. Especially with the mayor’s race, we cast one of our actors as a Donald Trump character and another actor as a Hillary Clinton character,” Williamson said. “It kind of expressed everyone’s dissatisfaction with the choices (for candidates). We filmed it two ways, depending on who the actual winner was.”

The December episode is set to feature an appearance by Butch Patrick, who portrayed Eddie Munster on “The Munsters.”

“He’s Grandpa Eddie now in our series,” Williamson said. “He was super nice and very supportive of the show. I grew up watching ‘The Munsters’ because of my dad because he loved it, so that’s definitely one of our inspirations for the show. So, getting (Patrick) to appear was exciting.”